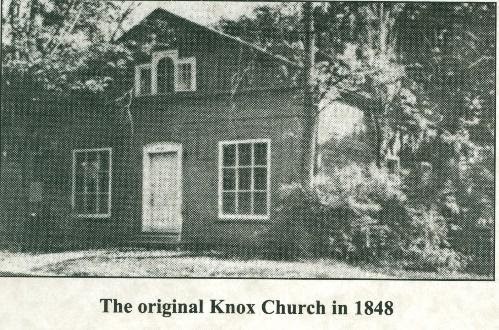 Knox Church was established as a Free Presbyterian Church in 1848.

The following is part of an article in the November, December 1848, Ecclesiastical and Missionary Record of the Presbyterian Church in Canada:
“The new church lately erected in Scarborough, in connection with of Presbyterian Church of Canada, was opened for the public worship of God, on Sabbath the 22nd of October, last, by the Rev. Dr. Willis, Professor of Divinity in Knox’s College, Toronto, who preached two eloquent discourses. The Church was crowded by an attentive audience.  Many could not get admittance, but remained outside at the windows, during the whole of the services, which occupied upwards of three hours”.

For over 170 years, Knox has continued to change with the surrounding community.

Knox, Agincourt is a heritage Church that was founded in 1848. The sanctuary building dates from 1872, and is located in the former village of Agincourt which is now part of Scarborough, part of Toronto.  The area is still referred to, by many, as Agincourt.

Knox Church Cemetery
There has always been a cemetery at Knox.  The earliest dates recorded on the tombstones are 1836 and 1848 which would suggest that there was a pioneer cemetery.

Knox Buildings
The first worship service and Communion at Knox Church, Scarborough was held on June 25, 1848 in a wood frame building.  There were 40 members present at that time. 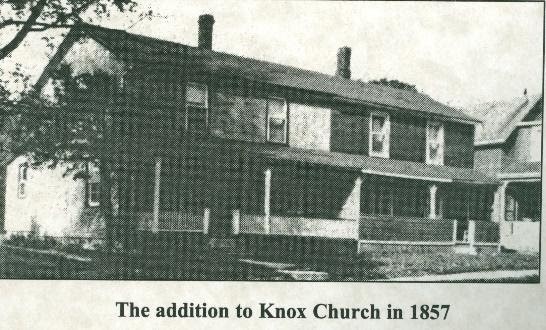 By 1857, a Sabbath School was started to support the growing congregation, so an addition was erected which doubled the seating capacity. 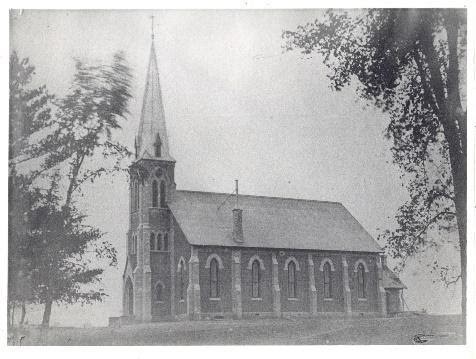 In 1872, a new brick Church was built at a cost of $7,000. The sanctuary has experienced many changes since then.

In 1903, the floor of the sanctuary was raised so that it slopes about 18 inches from back to front.  In 1904, an addition was built on the east side where the Church offices and nursery are located. 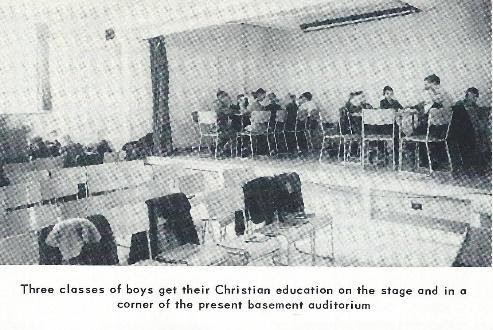 Men and women from Agincourt fought in both the First and Second World Wars.  It is noted in Church history that, following the Second World War, many veterans moved into the Agincourt area and the community grew.

In 1949, there was a need to enlarge the Church facilities to accommodate the growing congregation and provide space for Sunday School. Since the cemetery surrounds the sanctuary building, it was determined that the best solution would be to excavate under the building! Volunteers were organized into five teams or shifts, one for each night of the week. The work began early in 1950 and the new facilities were dedicated in March.   Unfortunately, Knox does not have a picture of the work done which is still known as “The Big Dig.” However, there is a picture of a Church School class in the basement following construction. 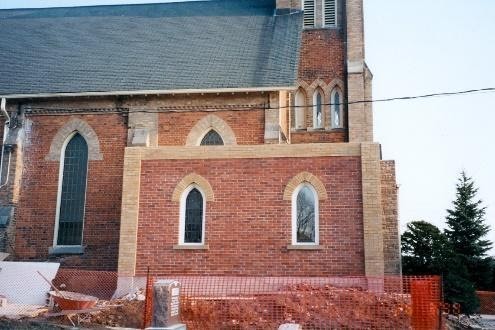 Agincourt continued to grow and again, in 1957-58, there was need for additional facilities.  A major fundraising project was undertaken and The Christian Education Centre was built to the north of the cemetery.

At the same time, a Narthex was added at the entrance to the Church.

A major project was completed in 1998, the 150th Anniversary Year. The Church leaders recognized the need to make the buildings more accessible and a $320,000 Knox Renewal Project was undertaken between 1996 and 1998 to upgrade the Church building, improve the parking lot, re-shingle the roof and improve the sanctuary windows.

An addition was built on the north side which blends with the existing architecture and brick of the original building. An elevator and new stairway provide access to the lower auditorium, the Heritage Room, which was also renovated during the project. 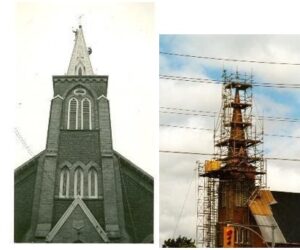 Knox Steeple
In 1874 a heavy windstorm blew off the spire and damaged the Church.  In 1930 and 1982, there were other projects to restore the steeple.

Check out the difference in how the work was done in 1930 when men can be seen hanging off the steeple and the structure for the 1982 restoration.

Windows
The original windows were replaced in 1939 with leaded glass windows. These windows were refurbished and stained-glass installed following the 1998 renovations. 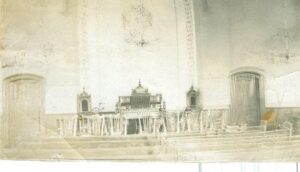 This photo, although of poor quality, shows the front of the sanctuary before renovations in 1904.  There was a pump organ installed in 1893 which was replaced in 1928 by a Cassavant pipe organ which has been enhanced over many years and continues to produce a rich sound. 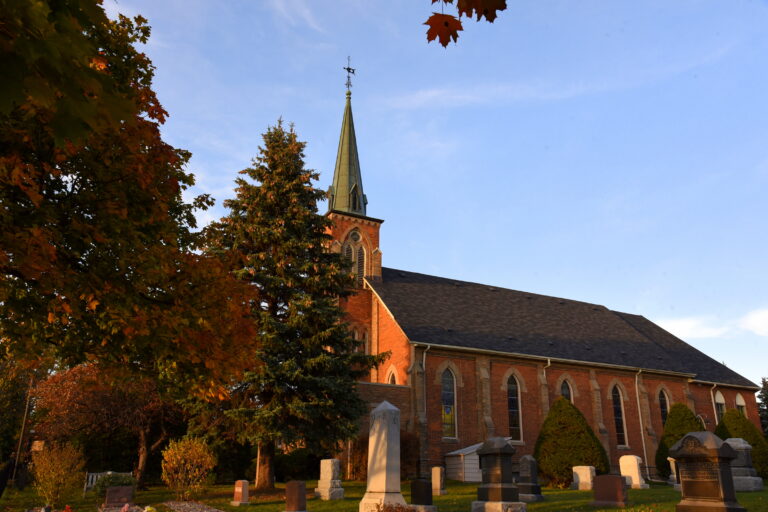 In 2007, the chancel of the sanctuary was expanded and, in the summer of 2019, the chancel was extended again and is now accessible via a ramp on the north side.

In 1925, a majority of members voted to join the United Church of Canada and the congregation since then has been known as Knox United Church.  Other members continued as Knox Presbyterian Church which is now located just west along Sheppard Avenue, half a block west of Midland Avenue.

The Knox congregation reflects a range of younger to older members and includes people from about 20 countries.  Knox includes an active Mandarin Chinese Fellowship.

The members of Knox believe that Knox continues to play an important role in the Agincourt community.